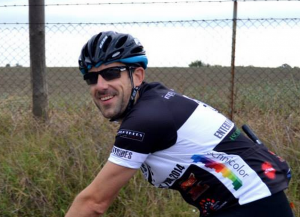 One of our most accomplished Ultra-distance members has shared his account from Le Tour de Mont Blanc. George Eyles, who is raising funds for Spinal Research.

To put it in perspective the route is 100Km longer than this year’s longest Tour de France route and in terms of climbing packs a punch.  The fabled Mont Ventoux where Tom Simpson died pushing himself to win the tour de France (with the help of amphetamines) consists of a 1,639 metre gain over 21.4km.  The Col de Grand St Bernard just one of the 13 peaks during Le Tour climbs 1,844 metres.   So it’s fair to say Le Tour de Mont Blanc is not for the faint hearted.

With an uneventful travel day on Saturday my major concern was the weather forecast of rain from the start and continuous throughout.

Despite the forecast Sunday’s start was dry and although still dark at 05:30 relatively warm.  With the start being a steep downhill section from Saisies the race organiser declared the first descent neutralised and nobody to overtake the lead car.  In any British race neutralised means exactly that, no racing…

There are a couple of things to know about Alpine descents; they are very steep, very long and all non British European’s appear to be extremely adept at them, I am not!

We took off in the dark plummeting down the Col des Saisies at speeds of up to 50Mph following the race car which I presume was piloted by Alain Prost.  Thank god the road was dry!

The first 60 miles were warm and lulled me into a false sense of security as I managed the ups and downs relatively easy averaging over 18mph.   Then came the first major climb, the Col du Grand st Bernard.  Climbing from 620 metres to a summit of 2,469 meters in 25 miles focused my mind regarding the challenge ahead.  I should have known better from running the Ultra Trail but I’d not considered it possible to climb continually for that distance without any letup.  During the later stages of the climb it started to rain and what I’d assumed to be mist was cloud that I climbed through.  With snow on the ground the temperature plummeted from 18 to 1 ºC.  At the summit I became a laughing stock for the French who looked amazed I’d not carried a jacket or anything warm for the descent!

Having packed my short sleeved ultra thin jersey and matching wafer thin gilet with cardboard from a box of bananas left at the checkpoint, a trick borrowed from the homeless of Soho, I stated the descent in pouring rain.  Wet roads, steep drops and hairpin switchbacks quickly defined a new level of terrified!  I deduced that the 2cm2 of rubber connecting me to the road was not enough and my lycra covering of comfort against the abrasive road.

The rest of the European’s descended with what I can only assume to be the same faith used in India by drivers as they put their faith in God and shot down the mountain.  At this point I could not figure out if my compulsive shaking was due to freezing conditions or fear, perhaps a little of both.

I also learnt that the only way to descend is ‘in the drops’ (hunched back in an aero position) as this is the only way to get enough leverage on the breaks, but the last thing I wanted to be was aerodynamic.  Great for racing this position is uncomfortable and puts stress on the neck and shoulders, but more of that later.

Now the good thing about the Alps is that you are either going down or going up so I took some comfort in the fact that I would soon warm back up on the next climb, and there in lies the issue.  You are either overdressed or underdressed, although without a jacket I was in no danger of being overdressed.

And so the race continued… Terrifying descents and horrendous climbs that last forever and continual rain.

Not being a complete idiot I’d packed my race jacket into a drop bag located at mile 130.  Even at this checkpoint I considered leaving the jacket as I’d become accustom to my freeze and warm cycle, however, I’m grateful to say I had the foresight to ask a fellow rider.  His comment “are you mad, take the jacket”.  In hindsight and to quote Julia Roberts if I’d not taken his advice it would have been a ‘big mistake, huge’.

The next climb was new to the race as the parcours had to be altered to accommodate another race in Italy.  The Col due Saint Carlo was a nasty 10Km climb averaging 10% with sections over 13%.  A conveniently located café at the summit provided much needed caffeine and shelter from the rain but it was during the equally steep and short decent that my neck and shoulder really started to trouble me while in the drops.

I was now in a state where it felt better to climb than to descend as it was warmer and put less stress on my shoulder.  My right arm was now unable to reach into my jersey pockets making feeding painful.

With the Col du Petit St Bernard done I took a look at my bike and realised I’d all but warn through the rear break blocks.  Having spent weeks finding a jersey for the race I was astounded at my stupidity not considering fitting a new set of blocks.  There were still two major descents and with the rain soaked roads I was extremely uncomfortable at the prospect of relying on front wheel only breaking.

Fortunately as I dropped towards Bourg St Maurice I saw a cycle hire shop that were able to supply and fit new blocks at a total cost of €2.5.  To put this into perspective the worn set cost over 10x that so it’s fair to say I was a little concerned about there breaking ability, still better something than nothing. 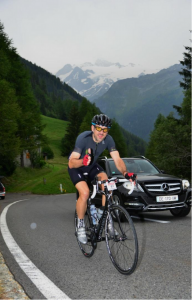 The Cormet de Roseland was the penultimate climb and while it tops out at a lowly 1967m I was feeling good climbing but the pain descending had worsened, still only one more drop left.  On the climb the weather changed from heavy to torrential rain and I found myself climbing towards the thunder and lightning!  As I racked my addled brain I recalled that carbon fibre fishing rods were bad and cars good in so far as lightening is concerned.  What I could not rationalise is if my carbon bike and rubber tyres was a good or bad mix.  Needless to say I kept pealing into the storm.

Half way up the Roseland I found myself picking a route through a large and vey fresh landslide.  Fortunately, I traversed through it without puncturing on the jagged rocks.  This gave new meaning to the frequent signs indicating falling where I started to pay much more attention.

Summiting Roseland I was cold, very cold and the loan checkpoint stood on the top of the mountain was covered in riders abandoning or shivering under blankets.  After a quick sanity check I decided to do the right thing, drank a cup of tea and pushed on to the finish.

The last decent was horrific.  The roads became fast flowing rivers and I had little or no ability to slow the bike down with the breaks rendered useless.  I was struggling to rationalise if it was the budget breaks, my inability to pull the leavers with my frozen hands or the deludes of water.  Fortunately, my fear of crashing was replaced by a concern of hyperthermia!  I wondered what the symptoms were other than the involuntary shaking coursing though my body.  Still the good news was that my heart rate remained a constant 122bpm.  It was a while later I realised there was a technical problem as no mater what I did my heart rate remained 122bmp!

On the basis I was alone on a mountain there was little option but to carry on down and take security in the fact that I was now more angry than scared.  Angry I could not break, angry my shoulder felt like it had a hot poker being pushed through it, angry there was no warm Starbucks, angry I was shaking and could not control my bike, you get the picture.

In any event I hatched a simple yet brilliant plan – ‘get to the final climb as quickly as possible’ in the knowledge that climbing warms you up, right.  Going anything other than quickly was impossible as I dropped the final 800 meters with little stopping power.

As I hit the final ascent I rode like a man possessed.  In my head I would have dropped a fully juiced Lance Armstrong as I pushed a massive 1000+ watts per kg (seriously!).  Unfortunately, my riding was based on the math I done in my semi catatonic state where I’d predicted a short final drag of 3 miles to the finish line where I would be greeted by a warm bath.  I’d not questioned my GPS suggesting a further 12 miles as I’d done the calculation myself…

As I climbed and warmed a loan figure stood on the doorstep of a barn clapping my effort “chapeau”, [me} “how far to the finish”, [French man] “sixteen kilometres”, [me] “shit” (the truth being more of a turrets Esq. outburst).

I was now pedalling squares (wheels) annoyed with my lack of numeracy and idiotic attack of the climb and starting to bonk (cycling term for running out of energy).  With only water in my bottles as I disappeared into the black I remembered a quarter flapjack in my right jersey pocked.  As I’d been unable to use my right arm to access the stash I’d forgotten about it.  After some on the bike contortionism I eventually pulled the soggy mess from my pocket.  Sorry Tom Kerridge but at that moment the wet and gritty flapjack was the nicest thing I’d ever eaten. 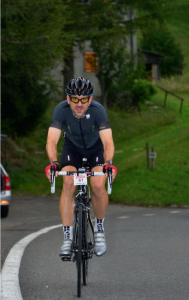 Shortly after I crossed the finish line 16hrs 21min, grabbed my t-shirt and cycled up the hill to my hotel room and bath.

Is cycling Mont Blanc harder than running it, no!  Not even close, but it is scarier and colder, much colder but in itself an epic ride of great enjoyment.

As you know most years I set myself a new goal to test my physical and mental ability as well as allowing me to raise money for Spinal Research.  I’m delighted to say my total now stands at £44k and on track to break £45k after this ride.

What next…
Notes to self for future acts of stupidity:
Neutralised in France means ‘balls out descent’
Never, ever try and follow an Italian down a wet Col, or even a dry one.
Always take a jacket when rain is forecast (always you idiot)
The Chilterns are not representative of the Alps!
You still carry the same weight up a climb having drunk a bottle but with the added disadvantage of a painful balder.
16hrs on the bike numbs your privates (I just hope it’s not like tying a rubber band around a lamb’s tail).